Okayama University and UNCTAD signed a comprehensive Memorandum of Understanding (MoU) to foster human resources for STI for SDGs, the UN body’s first memorandum signed with a university

On January 9, 2020, Okayama University and the UNCTAD signed a Memorandum of Understanding (MoU) to foster human resources for the framework of “science, technology, and innovation for sustainable development goals” (STI for SDGs). This is the world’s first memorandum signed between the UN body and a university.

Those present at the signing ceremony held at the UNCTAD headquarters in Switzerland that day included President MAKINO Hirofumi and Vice President and UNESCO Chairholder YOKOI Atsufumi, from Okayama University, Ms. Shamika N. SIRIMANNE, the director of the Division on Technology and Logistics of the UNCTAD, and Mr. Angel GONZÁLEZ-SANZ, director of the Science, Technology and ICT Branch, Division on Technology and Logistics, UNCTAD. President Makino and Director Sirimanne signed the MoU, based on which the university will provide short- and long-term human resource development programs to contribute to the “STI for SDGs” promoted by the UNCTAD.

In this regard, Okayama University held a press conference on January 14 at its Tsushima Campus, where President Makino, Vice President Yokoi, and Ms. HARADA Miki, director of the International Affairs Division, announced the conclusion of the Memorandum. President Makino said, “The conclusion of the Memorandum means our university is evaluated as a role model for universities around the world that are expected to work for achievement of the SDGs. Okayama University will promote its “whole institution’s approach” for achieving the SDGs to contribute to improving the global environment and increasing the well-being of all people on earth.”

Okayama University will use the conclusion of the MoU as an opportunity to further its efforts for human resource development for STI for SDGs and spread them to the world while disseminating related information at home and abroad, in cooperation with the UNCTAD, one of the main UN organs implementing the framework. 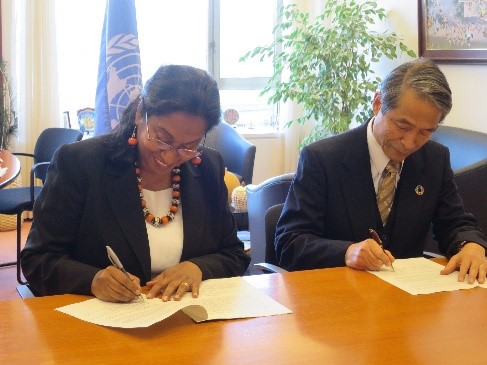 A scene of signing 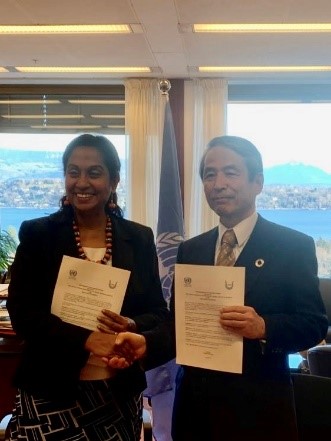 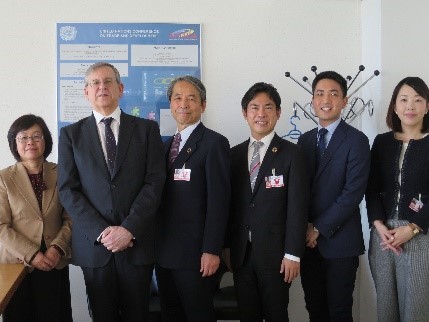 Commemorative photo with Mr. Angel GONZÁLEZ-SANZ (the second from left) 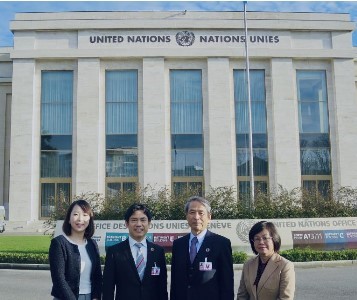